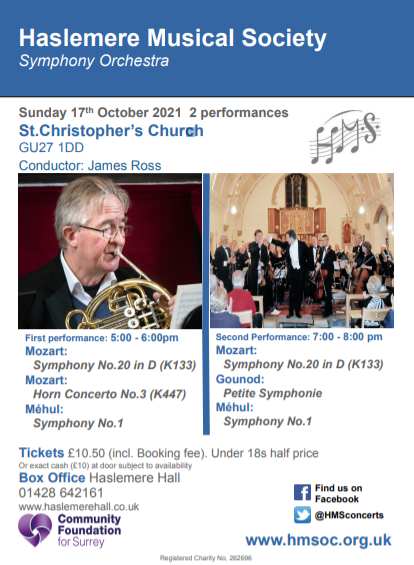 Mozart’s lively early symphony was a really positive way to begin these concerts as it is a festive work complete with trumpet flourishes, dialogue between the winds and strings and complete with Mozart’s usual trills and adornments. The sound filled the wonderful acoustic of this lovely church, so often used for performances of classical music. The lilting theme of the second movement was followed by a short minuet before the fast, breathless finale. It showed that the orchestra was on really good form.

Mozart’s third Horn Concerto followed with the soloist stepping out from the orchestra to perform this very popular work. Roger Doulton coped extremely well with the intricacies Mozart had written for the soloist. This was joyful, exuberant horn playing by a very capable amateur musician.

Méhul’s four symphonies are not well known and seldom played in the current era, but they are fine works and deserve to be heard more often. So HMS gave Haslemere the opportunity of experiencing the first of these works. The strongly percussive nature of the opening made one realise that time had moved on. We were now in the Romantic era, more akin to late Haydn and Beethoven, with greater energy and a much broader soundscape. The grand opening movement was followed by a gentle slow movement with raucous low horn calls. Pizzicato strings featured in the minuet before we were strongly reminded of a theme from Beethoven’s Fifth Symphony. However, neither composer met although both works were composed in 1808. This work established Méhul as France’s first Romantic composer.

Gounod’s Petite Symphonie allowed the wind section of the orchestra to step up and show their mettle. Composed for just nine wind instruments, it begins with a slow hymn-like theme before the tempo increases. Jaunty rhythms, a ‘hunting horn’ scherzo and a trio that has the feel of a country dance. This lovely work was a treat for the ear.

Unfortunately, the attendance at both concerts was much lower than expected, something that appears to be the norm following the pandemic lockdowns. This in no way seemed to affect the performance by the orchestra, who were collectively strong, very tight rhythmically and provided a wonderful return to live music in Haslemere. 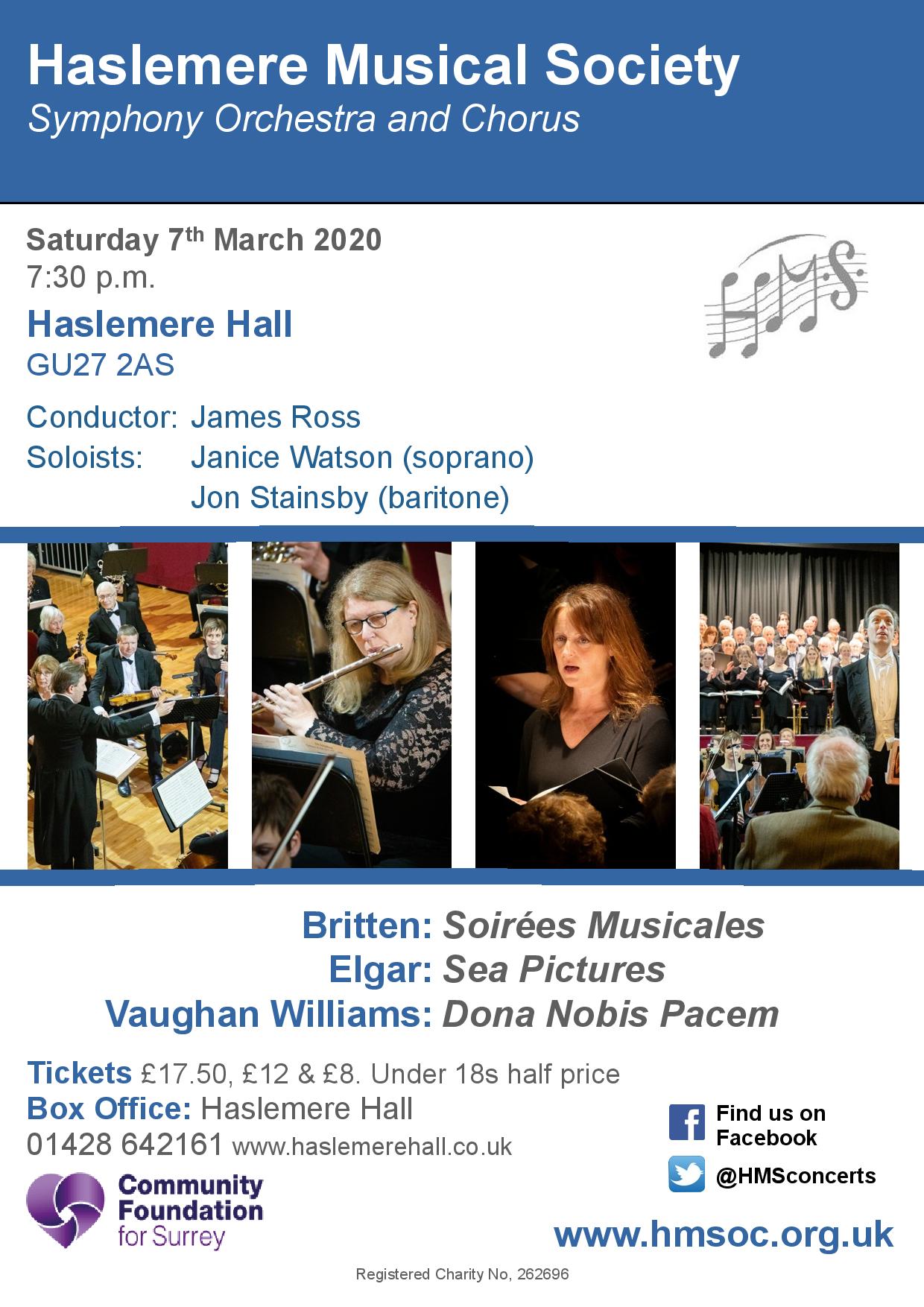 This was a night of exceptional music making under the inspiring baton of Dr James Ross, meeting the challenge of very different pieces with enthusiasm and musical skill. There was something for everyone from four giants of British music. The first half started exuberantly with Soirées musicales, Benjamin Britten’s rearrangement of Rossini. The orchestra played the five contrasting pieces spiritedly, with a lightness of touch, while being honest to the precise musical writing.
A quite different work in mood and colour followed; Frederick Delius’ Walk to the Paradise Garden. The orchestra met the very different demands of sustained lyricism and generally slower tempi, yet sustaining the expressive musical form.
It is always a challenge to bring new insights to well-known pieces, but this is clearly what accomplished soprano Janice Watson did to Elgar’s Sea Pictures, demonstrating the wide range of her vocal skill and understanding.
The second half consisted of a splendid performance of Vaughan Williams’ Dona Nobis Pacem. Both the choir and orchestra acquitted themselves excellently in this complex and emotionally demanding work. This is Vaughan Williams response to his first-hand experience of the horrors the First World War and the looming second: very clearly an anti-war cantata. The work might be relatively short, but packs a mighty punch. The poems of Walt Whitman may be an acquired taste, (though used previously in Vaughan Williams’ Towards the Unknown Region), combined with the words of comfort from the Christian scriptures and the Mass. Though interspersed with the salutary words of John Bright MP – a re-casting of the comforting words of the Hebrew Passover, and those of the prophet Jeremiah.
Throughout, the two soloists, soprano, Janice Watson and baritone, Jon Stainsby, brought a depth of understanding and emotional power to their performance. From the opening Agnus Dei to the last Dona nobis pacem, controlled yet with an intensity fading to nothing, Janice’s singing matched the words perfectly. Jon Stainsby also showed his full range of musical skills, from the dramatic to the intense anguish of his words in Reconciliation: “for my enemy is dead, a man divine as myself is dead.”
Mention must be made of Cole Bendall as Chorus Master, and Clive Osgood, Rehearsal Pianist, who have melded the voices into a harmonious whole; articulate, with clarity of diction and a clear understanding of the sentiment of the music and words. Mention should also be made of the team who put together the programme with its comprehensive notes.
One has to remind oneself that the performers were predominantly amateur, who gave fine performances of very different and complex works. It is to be sincerely hoped that Haslemere Musical Society will continue to prosper and perform to such a high standard.